Thanksgiving Turkeys and the Holiday

Home » Thanksgiving Turkeys and the Holiday

Turkeys, Chilis and the Holiday

As the Thanksgiving Holiday approaches.

Two turkeys, as is the custom here in my surroundings every year. One turkey done in the oven with regular stuffing and cooked at 350 degrees until done. Well basted. Delightful. Every year.

The second turkey, cooked outside on the Weber in winter. The temperature inside the grill, not really known as the thermometer has never been accurate at all. Three burners on until done. This turkey is prepared with Santa Fe Ole Mild Green Chili stuffed between the skin and the meat and the same stuff added to the stuffing.

The first turkey, tame and delectable.

The second turkey craved and consumed by all those attending and drinking the ‘dirty’ martinis and Bloody Marys served while everything’s cooking. It does not seem to matter what the temperature was for that second drunken turkey. It’s hard to find the mild green chili. Got lucky in Santa Fe. The second turkey consumers will feel bad enough on Black Friday without their insides being burned out.

On a happier Note:

Chuck
This turkey may be found walking about every day on Highway P outside of Delavan, blissfully unaware that turkey is America’s favorite Thanksgiving meal and Thanksgiving is on the 26th of November. Chuck wears his nametag on his right wing because he can’t talk. Governor Scott Walker would have pardoned Chuck but the governor has yet to get over the shock of being slowly forgotten as a presidential candidate last month.

It is hoped by the locals around Delavan, Wi. that President Obama will step in while there’s still time left and give Chuck a federal pass. 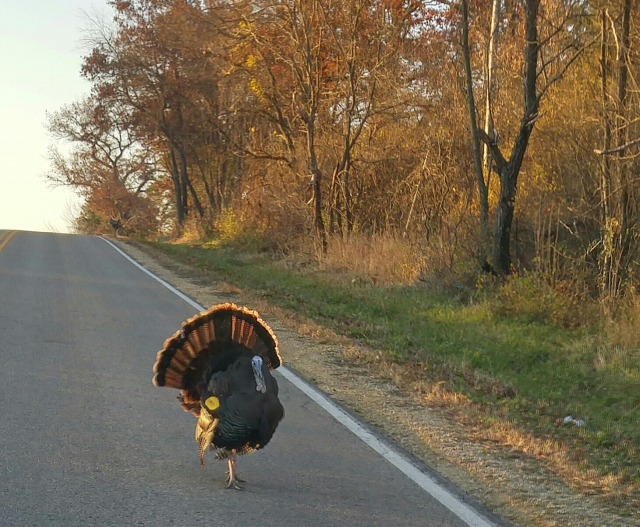