Lieutenant Howard never ran with lightening speed. He was more controlled, as befitting his rank of lieutenant and position of shift commander. He moved with a glow across the spectrum of his small town fiefdom. Twenty-five thousand citizens rested under his care, almost all asleep, as he commanding the midnight to eight shift. He took his first dose in his cruiser down at Main Beach through the electronic fence gate guards and well hidden behind the lifeguard headquarters. Storm waves blasted in from some Alaskan nightmare going on up north.  Waves arched up and smashed down through the pounding rain not twenty yards from where he sat, the 427 cubic inch engine of his Police Interceptor Ford idled dependably and warmly away. A cold winter wind through the Ford’s slightly open windows and made him shiver, even as the stuff he’d injected began to build a small nuclear fire deep inside him. He smiled into the face of blown spindrift.

“Forty-six, six seventy three,” scratched forth from his Motorola speaker.

“Shit,” he murmured, his smile immediately fading away.

“On two,” he replied, pushing a small button on the side of his mic to talk, then hitting a switch to go to the personal frequency.

“You there Lou?” Bobby, the shift dispatcher asked.

“Yeah,” he answered, knowing his voice would transmit his unhappiness at being disturbed but not letting on as to why that might be. The renewed glow from the drug helped calm him. While he waited for Bobby to come back he replaced his rig inside a special handcuff case he’d reworked for it. 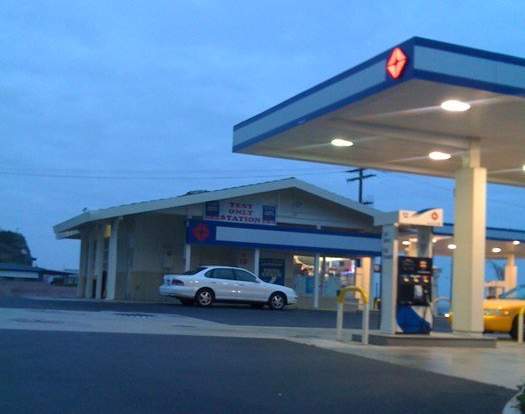 “Some motorcycles at north end limit. The ARCO on Pacific Coast Highway.  Nine One One but nobody picks up when I call. Would you mind drifting by and making sure they’re okay?” Bobby framed the question using his most wheedling tone.

“Ten-four,” he answered. Normally he liked hands on fieldwork, but on this stormy night he just wanted to enjoy the junk, the waves and his glow.  There were two other cruisers on patrol for a town of twenty thousand sleeping residents.  That Bobby hadn’t sent one of them meant they were busy doing other stuff in other places.  Since recent combined radio installations bringing all the small departments of Southern California into joint communication calls in general were no longer broadcast.

As an officer in the field you only got to know what the dispatcher was willing to tell you.  “Less communication sold as more communication,” he whispered to himself.  Nobody was out so he didn’t have to use Code Two, which was running at high speed with flashing lights only. The department didn’t use Code Three, with sirens, unless it had to. The protected the sleep of the citizens was given a lot of importance in a small town police department.

Howard took three corners gently, and then pushed his accelerator to the floor as he hit PCH. It was a two-mile straight shot to the corner gas station. Breaking down hard from a hundred and thirty-five his Ford moved in toward the pumps like the black land shark it was. Four Harleys filled with chrome sparkled brightly in reflected glare back from the Ford’s headlights.

“Ten six,” he told Bobby, letting the man know he was at the scene.

He turned the small key that unlocked the Remington Twelve Gauge pump from the dash. No department cop had ever fired one of the twelve gauges found in all their cruisers, except for a rookie who’d blown a hole in a roof when he checked to see if the gun was loaded.  It was comforting to have the powerful weapon available though.

Four ragged but rugged bikers were gathered around one of the bikes. Howard walked over, slipping his nightstick through the ring on his Sam Brown belt.

“You boys have a problem?” he inquired when he was a few yards away.

“We ain’t boys,” the largest of the men whispered as he turned. The man was huge. Howard was 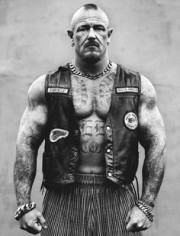 surprised by the man’s size and his nasty attitude. Not many people, except druggies and drunks, confronted a uniformed police lieutenant which such disrespect and attitude.

“I asked what the problem was?” he tried again.

“Not your problem,” the big man stated, this time quite loudly, before smiling broadly.

“This is private property and you’ll have to move on,” Howard replied to the affronting comment, keeping his own cool and his calm, his glow still going for him.

“This fucker’s high as a kite,” the huge man laughed openly, pointing at the lieutenant’s chest. The other three bikers stood from their couches and stared at him.

“Fuck, not every day you get to see a police lieutenant totally fucked up on the job,” the big man went on.

Howard was shocked beyond his ability to truly comprehend. The man had not only recognized the fact that he had fixed, but he was taunting him with the information. His face went totally red. His glow vanished. A stillness came over him.

He realized in that moment he was in combat although the action hadn’t yet begun. He hadn’t been in combat since the Nam. He smiled back at the huge man. A sense of relief flowed through his body, replacing the glow with a white noise softness of titanium steel.  Warm molten lava seemed to pour through his entire body.

“Get the fuck away from us. We want nothing from your shitty little town,” the big man yelled, as Howard backed to the passenger door of his cruiser.

“Chicken shit country bumpkin,” the huge man yelled, cupping his hands because Howard’s upper body had disappeared inside the car.

“Damn,” he breathed quietly when Howard reappeared. The sound of the first round of double ought buck being cranked into the chamber of the Remington froze all four of the bikers.

Howard stood near the right front fender, just outside the glare of headlights to enjoy near invisibility as well as superior firepower.

“We’re leaving,” the big man said, the other three bikers moving to the their rides. “We’re outta here. Keep your little town.” The big man started his Harley, his friends following suit. Four cycles rumbled loudly but not nearly as loudly as the sound of the twelve gauge going off.

The man screamed, instantly cupping both hands over his damaged ears.

Howard waited, slowly pumping another round into the chamber.

“Don’t shoot man, we didn’t do anything,” the big man cried out, moving his hands down to the handles of his Harley and then slowly pulling away. He was followed by the other three bikes.

Howard waited until they hit Pacific Coast Highway headed north. He gauged the rapidly opening distance between himself and the bikers very carefully.  He stepped to the back of his cruiser and fired six more rounds at the fleeing backs of the men. He gauged the distance at about two hundred and twenty meters, perfect for the right effect.

The cycles swerved crazily but none of them went down.

“You’ll be picking out some choice bits and pieces from your backs over the next few months boys. You all come back and visit any time you want now.”

The Remington went back into its locking holder after Howard carefully reloaded it. He’d have to clean the gun after the shift, but it had been worth it.

“Fully functional. I can do the job. But how did that dude know I was taking my stuff?” Howard said the words into the darkness, surf booming far in the distance, the rain pouring down from the sheltering ARCO sign. Adrenalin destroyed the effect of the junk, but he’d brought two hits, just in case.

“Forty-Six Six Seventy Three, did you hear shots fired near your location?” Bobby asked over the radio.

“Nah, Just the surf here. Ten-eight from this location,” Howard replied, letting Bobby know that he was done with the assignment and there was no further activity needed.

Returning back to his special location, windows once more partially lowered, he again felt the awakening energy of the moist cold wind.

“Can’t do my job and feel good while I’m doing it? Who says? Perfect judgment, fully functional. I could never have measured the distance to those Harleys so carefully if I wasn’t adjusting with the glow.” He pushed another load of the stuff into his arm and waited.

“One fully functioning patrol lieutenant protecting you this night” he said out the window to the sleeping citizens of his small town. Before the magic carpet swept him above the wind and waves he wondered about how the huge cycle rider had been able to see the junk inside him, and if maybe others might be able to see it to.

Those thoughts faded as he eased up from the beach, once more to care for those who’d so confidently trusted their care to him.