Arch Patton found himself inside the confines of the Santa Fe County jail, on some vague trumped-up barroom brawl charge. He was in the “drunk tank,” which is what they call the cells they use for new prisoner intake. No bars, no windows, just concrete and steel. No way to see out of the ten by twelve box, and no ability to hear. He was alone for the first few hours, thankfully, as he had to come to terms with being inside an American penal institution for the first time. He’d already been in a few abroad, so he wasn’t exactly a “new fish.”

It was Christmas Eve. He’d been drunk earlier, but the heartless Santa Fe “Gestapo” had shown no mercy in spite of the impending holiday. And the tank didn’t remain empty for long. The evening riff-raff of Santa Fe, New Mexico began to flow in. Dredged from a pristine city that prides itself on not having any homeless people. No, Santa Fe doesn’t, as all potentially “homeless” individuals get combed off the streets, and put into a heartless, modern version of the Bastille, conveniently located five miles South of even the outer most edges of the city.

Eventually the “tank” became so crowded that the entry of one more body meant that there was just no floor space left. When the space could get no fuller, they jammed the door open and forced a huge American Indian through. The heavy steel slab clanged shut with a deathly finality. The Indian stood there motionless for a few seconds, and then stared down at the man propped against the bare concrete wall next to Arch. The man moved out from under that steely gaze, finally settling atop the rim of the stainless steel john located in the corner. The Indian took his place. Arch and the Indian were inches apart. The big man turned his head, and his coal black eyes glared icily. Arch realized instantly that this was not an Indian like the one who’d helped Jack Nicholson in One Flew Over the Cuckoo’s Nest. No, this was an Indian from hell, more like the one who’d killed the girl in The Last of the Mohicans.

Arch met the man’s eyes and showed no fear, but finally did look away. He was an old hand at the predation game. You do not show fear to a predator. That’s what the predator is looking and waiting for, because it identifies you as prey. No, you meet predation with impassive, emotionless and still presentation. The predator will likely take you for another predator, and there’s little point in attacking another predator unless territory or survival is an issue. The risk of injury is high. Predators are deathly afraid of injury, as then they become the prey they so loathe, and must attack to survive.

There was no trouble from the Indian, though, as the hours passed. Nor from any of the usual suspects. Just prisoners inconveniencing the poor guy whose spot was on top of the john. He had to move so the drunks could be sick, and worse. Some corrections guy must have known a modicum of mercy that night, or more likely, there were just too many prisoners for the facility to hold, because finally they came for Arch. The guards called his name, and told him he was being “rolled out,” which is prison slang for being released. He went with enthusiasm, but accidentally kicked the foot of the snoozing Indian as he departed. “Excuse me white-eyes!” the Indian hissed, already in a sitting position as he began to rise to his feet.

Arch held himself together against the pure ferocity of the man’s expression, and the paralyzing stare of his hawk-like eyes.

“My apologies, I was careless,” he responded, flatly; then he fluidly moved to join the corrections officer at the door. The Indian’s eyes followed him out the door, and remained embedded in his mind, as he went through the many steps of processing out. Finally, the guards took him to the big door of intake, opened the steel slab with a key about the size of a cola can, and shoved him through.

“Merry Christmas,” one guard said with a laugh, slamming the door.

Arch’s relief was immense, until he looked around. The metal halide of the parking lot lamps allowed the driving snow to appear as if he was standing adjacent to Niagara Falls. And it was cold. He wore an old Sheepskin Company coat so he knew he wasn’t likely to freeze, or at least not the torso of his body anyway. But there was no way he was going to make it the many miles to the edge of town, much less a few more miles to anywhere he might catch a ride. He turned to see if there was a pay phone on any of the walls to call a cab, not that he had any cash, but there were only pitiless ice-covered walls of concrete.

The giant steel door began to open again and for an instant Arch felt relief. A brief gust of warm air rushed out, but was extinguished in an instant when the door quickly closed again. The big Indian from the drunk tank stepped out, took two steps forward, and stopped to look down into Arch’s eyes. Again there was no expression on his face. He was almost a foot taller than Arch, who, as before, tried to look impassive. Arch had no weapon. In spite of many years of hand-to-hand combat training, he knew he was no match for the man.

“No person,” Arch replied uncomfortably to the Indian’s strange, flat-sounding English. “Santa Fe,” he said, pointing toward the direction the snow was cascading out from. He felt like a frightened idiot.

“Not this night,” the Indian said, before starting out into the storm.

“This way,” the Indian said, his voice barely audible.

“I’m coming,” Arch yelled, cupping his mouth with one cold hand, and then whispering to himself, “let my death be quick,” before rushing to catch up.   He followed the Indian into the night. There was no trail, no moonlight, nor any other way to establish bearings, so he simply walked behind the huge man, trying to stay as close as he could.

The two men moved downhill together through what Arch knew to be the La Bajada Canyon, finally trudging under an overpass that held up the four lanes of Interstate forty.

La Bajada Canyon from the Mesa

A yellow glow in the distance slowly resolved into a conglomeration of lights, until at last it was recognizable as a roughhewn collection of adobe buildings.   The Indian adroitly wormed his way in and out between the densely packed mud structures, moving surely, but silently. Arch followed. More metal halide lights glared occasionally from atop some of the structures, giving assurance that the snow had not abated in its attack. At last they came around a corner to a wooden door. The upper floor of the adobe structure jutted out above, so they stood and beat the snow from clothing and boots as best they could. 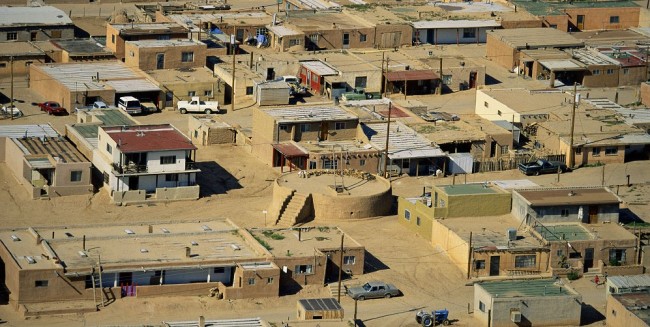 The door opened without anybody knocking. An old woman stuck her head out, and then motioned them both inside. Arch stepped into a different world. The room was filled with Indians of all ages. They were all seated at many tables, seemingly strewn about without order. The big Indian motioned Arch to an empty seat between two young boys. Everyone in the room stared at Arch with big unblinking eyes, but said nothing.

Arch sat, more from fear and trepidation that was willingly following rational directions. The two boys on either side of him reached for bowls and started scooping stuff onto Arch’s plate. Tortillas and refried beans. Until then Arch didn’t know Indians ate seemingly Mexican food. There were also corn things, with lots of hot sauce. Arch started to eat. The food didn’t really taste like the Mexican stuff he’d eaten for much of his life. It was better. There was a different, but wonderful, edge to it. The food was unbelievable, both in quantity and quality.

Everyone started eating as soon as Arch did, following some invisible signal. Nobody looked at Arch, so he ate until his plate was clean. The small boys on either side of him again filled it without comment. When Arch finished the second plate, they refilled it again.   He looked over at the old woman who’d opened the door. The big Indian had seated himself next to her. After checking out his third, rapidly-disappearing helping of food, Arch saw her smile, very briefly.   The big Indian looked down at her and smiled for the first time.   Suddenly, Arch understood the looks. The old woman liked the fact that Arch loved her food, and the big Indian appreciated her joy.

“I’m Raincloud,” he said, gesturing around at all the people sitting around all of the tables. Everyone turned to smile at Arch, as if on cue. “Welcome to Santa Domingo Pueblo and my family. White people don’t come here often, except to take pictures along the road.” Raincloud stopped talking, but kept his hand extended out toward Arch.

“Arch…Arch Paton,” he stuttered out. “Thank you. This is wonderful.” He immediately noted that Raincloud’s accent was gone. He stared at the man, one eyebrow raised in unspoken question, finally taking the Indian’s hand and feeling his strong grip.

“Indian humor,” Raincloud smiled back. “Graduated from Berkeley. Master of Fine Arts out there, but here I’m the tribe’s Shaman.” Arch was stunned, relief flooding out from him. “I thought…” he began but Raincloud cut him off.

“That you’d be used for target practice or something later?” Everyone started laughing, with the boys on either side of him making believe they were shooting him with little bows and arrows.

A silence fell over the entire room.

“They said I was disturbing the peace,” Raincloud responded. “They said with my attitude I couldn’t get along with white folks. So they threw me into a cell with a white guy. How am I doing?”

“Pretty good,” Arch responded, hoping it was the right response. “I mean in the opinion of this one white guy.” The room relaxed and everyone began to eat, drink and talk again. After the food was cleared, Arch got up and followed Raincloud to the fireplace.

“Stay the night,” the big man said. “I’ll drive you back to Santa Fe tomorrow. The kids are getting your room ready. Check to make sure they haven’t short-sheeted you. They think they’re terribly funny, and they’ve never had a white man to practice on before. You might consider staying the day, though, because here the day after Christmas is more important than the day itself. Christmas is the Catholic celebration and we’re all Catholics. But tomorrow is our own celebration.”

Arch sat before the fire in silence, listening to the kids singing Christmas carols and wondering how he could feel so completely comfortable in a culture that should have been entirely alien to him. He had his own culture. The Indians had their culture. Two sets of cultures. Two belief systems. And yet, he felt more deeply at home right where he was, than he ever could have imagined only hours before.